Oysters I have learned can be extremely polarizing – you either love them or hate them. Luckily I am on the ‘I love oysters” team and on my Island oyster quest I have managed to: convert a former non-believer; make a lover out of a fence-sitter; and introduce this delight to a newbie.

My sister-in-law from Montreal and a friend from England were visiting recently (we tend to have a B&B going in the summertime) and I planned the perfect Island night out – slurping oysters on a warm summers eve.

First stop was Sims Corner Steakhouse & Oyster Bar, located on Queen Street, where elegant decor and excellent food go hand in hand. I am very partial to a good steak (Sims’ pièce de résistance), but it is also one of my favourite places to go for appetizers.  The baby back pork ribs in a hoisin, sherry glaze are perfectly sweet, spicy, and fall off the bone, but this night was dedicated to our oyster crawl.  We ordered fresh Raspberry Point and Colville Bay oysters served with housemade cocktail sauce, horseradish, and lemon as well as some broiled oysters topped with bacon butter and Grana Padano shavings.  Some purists, including Chef Michael Smith, as he animatedly shared at last year’s PEI Shellfish Festival, believe that the best way to eat an oyster is au naturel.  I’ll eat them prepared all ways, but I do like a touch of lemon and horseradish.

Our guest from England had never tried (or even dreamed of trying) oysters. We had him recite the oyster oath from the PEI Oyster Society which welcomed him in into this delicious Island world of “salty kisses”.  He was an instant fan and couldn’t get enough. My sister-in-law, Lisa, thought she didn’t like oysters, but all it took was one slurp and she was hooked as well. All of the staff at Sim’s are very informed and passionate about what they do and the supervisor, Marion Maclean, even took the time to show us how to shuck.

The broiled oysters didn’t take any courage for the newbies; just the smell of the melted cheese was comforting and familiar. The taste was spectacular, the lightly cooked oyster topped with the salty, caramel tasting cheese and a hint of bacon.

The last stop for the night was Fishbones on Victoria Row. This is the best place to come for some drinks on the patio with friends (if you need some nourishment before the drinks try the pulled pork nachos – yum). Later in the night, there is always a great band playing inside as well.  There are giant oysters on the wall as décor and with a name like “Fishbones” you know they are serious about their seafood. Jared Flemming, was behind the bar shucking oysters and let me try my hand at a couple. I am happy to report that I did not injure myself or others and it was surprisingly easier than I thought. It is a matter of finding the right place to angle and twist the oyster knife. I am now a self-professed expert.  We ordered a mix of lucky lime, pickle point, and shining seas oyster all originating from Raspberry Point Oysters. I couldn’t pick a favourite, they are each slightly unique yet all have that tell-tale sign of a good oyster – the taste of the sea.

My oyster crawl couldn’t be complete until I checked out one of the most talked about rural Island restaurants famous for it’s seafood.  So a few days later when my cousin and his fiancée from Halifax were visiting (remember what I said about the B&B?!) we took them to a picturesque lunch at Carr’s Oyster Bar located in Stanley Bridge. This was actually my first time eating here too and I can officially say that the rumours were true, the food and the view were superb.  We ordered oysters Rockefeller and fresh oysters, which come straight from their own oyster lease located on Malpeque Bay. There is a choice of small, large or extra large sized oysters. We chose small (a regular sized oyster) and large (I decided go big or stay home) and afterall it was an oyster crawl, so I had to take the challenge.  It was almost too big for one slurp, but I did it!  Our waitress, Stacey Holmes, was the picture of PEI hospitality, as soon as she realized it was my cousin’s first time eating oysters on PEI she brought over the oath. He was rather indifferent to oysters before this day, but of course we won him over!

Just like PEI summers, all good things need to come to an end! So with that, my Island oyster tasting adventure was complete and everyone agreed – PEI oysters are just the best!  Stay tuned for Part 2 of my oyster adventure in Prince Edward Island, where I spend an afternoon with some charming oyster farmers at Raspberry Point Oysters. 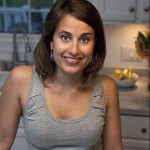 Natasha Chandler moved to PEI three years ago after a trip around the world with her husband. Since then she has been eating her way around this delicious Island. Passionate about all things food and her Italian roots, she writes a blog cucinachronicles.wordpress.com.