We received so many beautiful photos from photographers over the past year that our team thought it would be a fun idea to involve them and the public to pick the cover for the Welcome PEI Handbook in 2014. So off we went to create a Facebook contest, we called on photographers to submit their best PEI photos for a chance to win our cover spot and a cash prize. The response was amazing with over 200 photos submitted. Our team had fun mulling over the many beautiful Island scenes and sunsets. We finally narrowed down the photos to 3 finalists that would compliment the layout for the cover of the handbook and let the voting begin!

The winning photo chosen by Facebook fans was of Covehead Lighthouse on the North Shore of Prince Edward Island taken by Neil Taylor. I have to admit; I was secretly pleased it won, as it was my personal favorite! It is an inviting photo that captures one of PEI’s most iconic symbols. I caught up with Neil to find out more about the guy behind the lens.

First off, what we all need to know is “Are you an Islander?”

No, I’m from a town outside of Fredericton, New Brunswick. I moved to PEI four years ago to be closer to my family and I fell in love with the Island. I studied photography at the Centre of Arts and Technology in Fredericton, which was the major kick-start to my adventure with photos. I’m a Graphic Designer by trade, but photography is a hobby and a real passion for me.

What do you love taking pictures of?

One thing that rivals my love of photography is travelling. I penny pinch to try and go on at least one vacation a year and usually what I’d like to photograph next plays a role on where my next trip will be. I enjoy nothing more than setting up my camera along a lake or other beautiful landscapes and capturing a sunset as best and uniquely as I can. Another love of mine is flying, and anytime I can get up in the air to do some aerial photography is a treat. As far as my future goes, I hope to someday save up the funds to visit Europe, photographing and enjoying what that part of the world has to offer.

What’s your favorite place in PEI?

There are still so many places I want to explore on PEI, but so far I would have to say, as far as photography goes, the stretch of land from Brackley Beach down past Covehead lighthouse. I’m a big fan of the beach and visit it frequently in the summer. Also at night there is sometimes a chance to catch the Northern Lights. In general, my favorite place on PEI is hands down Hunter’s Alehouse for Friday night trivia with great food, great people, and great entertainment.

What are your three favorite photos you’ve taken?

When I was much younger around 1993, my father was in politics and worked in the Fredericton Legislator’s Building. I still have memories as that young boy walking into the huge impressive building to visit him at work. I got that chance to visit this building again in 2009 and while I was in there I walked to the top of this spiral staircase and was greeted by quite an architectural shot looking down.

In 2012, I got the chance to visit New York City. Unfortunately it was a case of bad timing as it was at the same time Hurricane Sandy was about to make landfall. Although this image isn’t necessarily one of my favorite images photography wise, it’s special to me as I was there and got to witness the leading edge of the storm starting to blanket the city, caught in this photograph.

This past summer, I was in New Richmond, Quebec shooting a wedding. The night before the wedding, after the rehearsal, I decided to set my gear up at the local dock/park and wait for the sun to set. The rolling mountains in the background made for a unique backdrop. 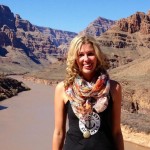 Monette Pasher is the Marketing Director for Welcome PEI and Executive Director of Atlantic Canada Airports Assoc. If she’s not globetrotting to promote our beautiful part of the world, she is most likely to be found floating around the ocean in her kayak. Monette spent 7 years living on Prince Edward Island exploring the best places to kayak and eat and is happy to share her inside scoop with you.