The northern lights are a magical thing to experience. When the conditions are perfect and everything aligns, vibrant colours dance back and forth across the night sky. I remember the first time I watched the aurora in person. So much excitement and thoughts racing between how incredible this is while frantically fumbling with the camera in the dark.

Now, before I make any promises, it’s important to be realistic with proper expectations. PEI is far enough south that it takes a fairly active solar storm and even still, the aurora lights will be off in the distant northern horizon. I have not experienced the wave of lights directly over head like I have further north.

The second expectation is to understand our cameras are more sensitive to light and can see much more than we can. That distant glow on the horizon we might confuse with city light pollution may actually be the northern lights. Like stars, photographs make the northern lights brighter than they appear.

Similar to our every day weather, the northern lights also have a predicted forecast. In it’s most simplest definition, the forecast is measured on a scale called the KP index. The higher that number, the stronger the potential show, and the further south it may be visible from. In locations like Yellowknife, Iceland and Greenland, a score of 1 is all that’s needed but on PEI, you’ll want to wait for something closer to 5 to increase your chances.

But even still, it will still feel like flipping coins. The rating could reach 7 or 8 but you’ll still not have any guarantee. It really is a go and see type of deal.

From my own experience, early on in the night is better. My own images in PEI have been taken between 10pm and 2am.

What to Look For

I mentioned that the wave of lights overhead would be very rare and something I’ve not personally witnessed on PEI. The northern lights seen from PEI more often look like pillars of light shooting up from the northern horizon. Look for a series of vertical beams.

It’s most likely that the camera will see more than you will. You many not even see anything. This camera trickery is caused by a very sensitive sensor in partnership with a tripod and a long shutter speed exposure. One approach before you set everything up is to increase the ISO has high as you can and take a quick image. If there is any activity at all, ISO 6400 or higher will let you know. At that point, lower the ISO back down and start shooting.

For the best results, you’ll want to focus on infinity to keep the stars in focus. The bigger the aperture (small f-stop numbers), the better. Smaller f-stop numbers can make a difference between 15 seconds and several minutes.

The longer the shutter is open, the more movement and blur you’ll experience. I find with a wide angle lens, you’ll start to see star movement and the early beginnings of star trails around 20 seconds. You’ll also want to keep shutter speeds to a minimum to main definition in those northern light pillars because a long exposure will blur those lines and blend the sky into a blanket of green.

If you’re not familiar with infinity focus, try using manual focus and locking on to a distant street light. Once you do that, don’t touch it again and you’ll be good for the night. There is no need to use auto focus. Auto focus will just cause needless frustration as the camera tries the impossible task of finding focus in the dark.

I wish it was easy because it really is a fantastic thing to see. Short of suggesting a trip further north, my suggestion on PEI is to keep an eye on the KP and be committed to the chase. Eventually you’ll be rewarded.For the very curious, a few resources to follow are aurora watch, solarium and space weather, but honestly, I mostly check softservenews (available on Facebook and Twitter too) for it’s simplicity. If you’re an app person, check out AuroraAlerts or Aurora Forecast.

Keep in mind that the forecast is typically 20 minutes notice and can die off as quickly as it picks up.

Best of luck and maybe we’ll cross paths some late night stumbling around in the dark on the beach!

For more things to discover on Prince Edward Island, check out PEI’s Rugged Coastlines, 5 Places to Discover This Winter, and 10 PEI Views You Need to See. 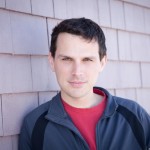 Stephen is a photographer, designer and artist focused on telling the stories of Prince Edward Island and his work has been featured in many publications for Tourism PEI and Parks Canada. You can view more of his beautiful imagery at www.stephendesroches.com or on Facebook at http://facebook.stephendesroches.com